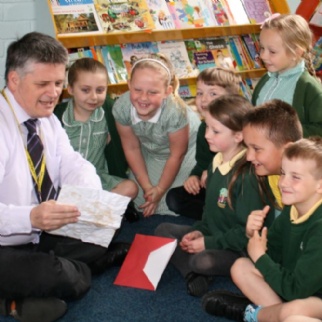 Last week, Mr Morgan arrived in his office to find a letter addressed to Mrs Braund’s Read Write Inc group, who sit outside my office everyday doing their phonics work. It was most unusual.

He opened it with the children and read it with them. It was from a Vampire, but was dirty and crumpled! It appears that the children wrote to the vampire as part of their work, helping him with ideas of how to be more scary as he wasn’t very good at being a vampire. These letters were scanned in and sent to his website.

In his letter back, he thanked them for taking to time to write and explained how he had taken their advice by getting a new cloak made, some fresh new teeth and had been practicing being scary. He was really pleased with their work!

Sadly, the children were not happy with his, as the letter was full of spelling and punctuation mistakes, so they have kindly been correcting it for him to send back!